Mare Crisium in a lithograph printed in 1834 from observations at the Royal Observatory in Edinburgh. The photograph was made by an amateur astronomer in 2010.

The moon “appeared like a Globe of Molten Silver, and every object of the extent of a hundred yards was quite visible,” observed William Scoresby, a vicar with an interest in astronomy. He was lucky to be among the first to view the surface of the moon using the largest telescope of the 19th century, Lord Rosse’s Leviathan of Parsonstown.

“Edifices, therefore of the size of York Minster [a gothic cathedral, one of the largest in Northern Europe] might be easily perceived if they had existed,” Scoresby wrote in 1845. “But there was no appearance of anything of that nature, neither was there any indication of the existence of water or of an atmosphere. There was a vast number of extinct volcanoes several miles in breadth; through one of them there was a line in continuance of about 150 miles in length which ran in a straight direction like a railway. The general appearance however was like one vast ruin of nature.”

Rosse’s telescope was built around a great mirror, a round slab of copper and tin alloy six feet in diameter, ground to a concave shape and polished. The mirror was mounted in a wooden tube fifty-eight feet long (built by local coopers like a very long barrel). This tube hung between two stone walls, seventy feet long and fifty feet high, buttressed with gothic arches. Observers had to climb to a catwalk riding along the top of the barrel and look down into the telescope to view heavenly objects focused in its mirror.

Imagine the thrill of taking in the moon’s surface in close-up views for the first time, the satisfaction of weighing the evidence of your own first-hand observations about our planet’s orbiting companion, commanding attention each night but so deeply obscured by myth and superstition. 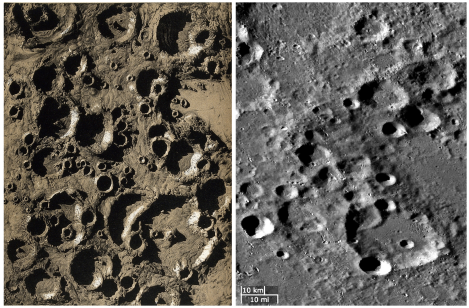 Impact cratering southeast of Tycho Crater depicted in an 1863 lithograph by E.M. Williams after J. Nasmyth (via Wellcome Images), compared with an image of the same region made by NASA’s Lunar Reconnaissance Orbiter.

Mare Humorum, from E.L. Trouvelot’s 1875 atlas of astronomical drawings, and as imaged by the Lunar Reconnaissance Orbiter. 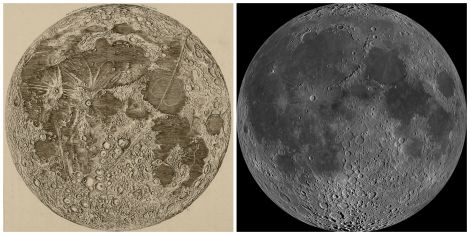 Cassini’s moon drawing made in 1679, and a composite view assembled from Lunar Reconnaissance Orbiter images.