“We then experimentally shortened the penis using scissors, without harming the male. We show that the shorter the penis after cutting, the lower a male’s reproductive success.” – Dougherty et. al. (2015)

Now here’s a discovery worthy of an Ig Nobel Prize, I thought when I first came across this scientific report on what happens to the mating prowess of a male seed bug when you surgically shorten his penis-like intromittant organ. 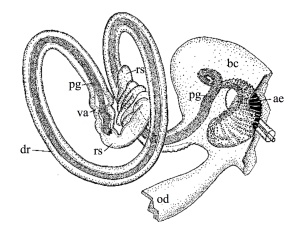 This drawing shows the female seed bug’s labyrinthine ductus receptaculi (dr). The male organ enters at the bursa copulatrix (bc) and must reach the receptaculum seminis (rs), which is guarded by a muscular valve-like structure (va). (A. Tadler. Proc R Soc Lond B, 1999)

His prowess suffers, obvi. But the point of this research is actually pretty important. These bugs illustrate a lot about evolution and sexual selection.

To succeed at mating, the male seed bug needs a winding organ that is nearly as long as its body. In a kind of sexual selection arms race, female seed bugs have evolved labyrinthine genitalia that give them more control over which males get to be baby daddies.

Maze runner: the length of a male seed bug’s mating organ is about 70% of its body length.

The maze-running males typically spend an hour or more performing “complicated genitalic manoeuvres” to achieve full penetration, according to a trio of very patient scientists who examined the sex parts of 69 (that’s right, 69) seed bug mating pairs that they had freeze-fixed at various moments “in copula”– as shown in the photomicrograph below.

That’s dedication to science right there.

And now there’s experimental proof that males need every millimeter of their long, coiled intromittent organ to succeed at reproduction. Liam Dougherty and colleagues at the University of St. Andrews surgically snipped seed bugs’ penis equivalent to various lengths – careful to leave them functional – and found that the shorter the penis, the lower a male’s reproductive success.

A photomicrograph from the freeze-fixing study by Micholitsch and colleagues.

Selection of a conspicuous male genitalic trait in the seedbug Lygaeus simulans by A. Tadler. Proc R Soc Lond B (1999)