For bicyclists, safety in numbers

Good news for bike commuters: accident rates are decreasing – rapidly in some cases – as the number of cyclists on the road increases.

In Minneapolis, for example, cycling accidents dropped to less than half the 1993 rate as the number of regular bicycle commuters doubled over the past two decades, the city recently reported. The number of bike commuters rose from 3,000 in 1993 to 7,000 in 2011, while the number of reported crashes held steady at around 300 per year.

Even individual streets and intersections with higher volumes of bike traffic tend to have lower crash rates than those that see fewer cyclists. A study comparing 95 intersections in Malmo, Sweden, found that the number of accidents per bicyclist decreased abruptly at intersections with more than 50 bicyclists an hour.

The chart below, from the journal Injury Prevention, shows how the risk of injury drops as the number of people bicycling (or walking) to work increases. It’s from a comparison of accident and commuting data from 68 cities in California. 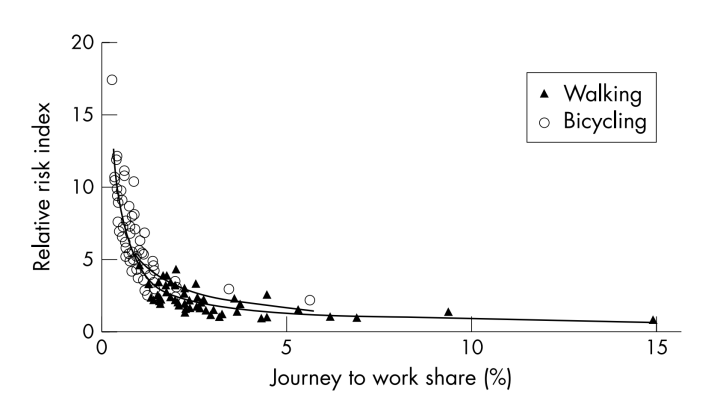 Cycling also became safer in Australia as more people became regular riders. Serious injuries per 10,000 riders fell from 29 to 15 as the number of regular bike commuters rose in Western Australia. But when ridership plummeted in neighboring Victoria (after that province enforced a mandatory helmet law) rates of serious injury and death actually increased.

Nobody’s pinned down how the safety-in-number effect works, but it’s been documented repeatedly all over the world. Part of what’s going on has to do with cities adding better warning signs, bike paths and other infrastructure. When roads become safer and more inviting for cyclists, more people opt to ride.

But there’s also some evidence that motorists behave better – by driving slower, for instance – when they see more cyclists and pedestrians along the road.

And when you live in a place where bike commuting becomes popular, you are more likely to try it yourself. That experience may be an attitude adjuster that makes you more alert and considerate around cyclists when you’re behind the wheel of a car.

[Cross posted from my bike commuting blog at Nutcase Helmets]