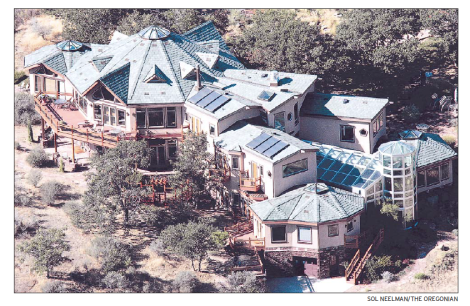 [ This investigative piece won the enterprise category for large newspapers in the Society for Business Editors and Writers annual contest in 2007.  “The Oregonian’s well-told tale shows how affluent doctors are getting millions in state funds that were meant to help small-town doctors pay their malpractice premiums,” the chief judge said. “‘Millions for Rural Health Miss Mark’ is terrific enterprise work.” ]

Ashland plastic surgeon Scott Young offers face-lifts, liposuction and breast augmentation in a prosperous town known for its annual Shakespeare festival and its pricey real estate. The 52-year-old physician owns an 11,000-square-foot, 11-bedroom house and “spiritual retreat” with wraparound views of the scenic cliffs on his 1,700-acre spread a few miles north of town.

Young nevertheless qualified for financial aid as a rural doctor under a state program that awarded him a total of more than $21,000 in 2004 and 2005, state records show. Any licensed physician in Ashland – or any other location at least 10 miles from a city of 30,000 or more – is eligible.

The three-year-old program was supposed to help financially struggling doctors, especially those who deliver babies, survive in rural Oregon. With a projected price tag of $25 million, it is the state’s largest expenditure on efforts to improve access to rural doctors.

But an analysis by The Oregonian shows that the program is sending millions of dollars to specialists in places where doctors abound and residents have a choice of hospitals. Of more than 1,100 doctors who met the criteria to qualify for support in the program’s first two years, fewer than 200 worked in communities with serious unmet medical needs, as defined by the state’s Office of Rural Health. More than 200 recipients worked in cities or suburbs within 15 miles of two or more hospitals.

These results are not what lawmakers expected. Informed of The Oregonian’s findings, Rep. Gordon Anderson, R-Grants Pass, said the Legislature needs to reconsider the program’s definition of ” rural” and which specialists deserve public assistance. Rep. Bob Jenson, R-Pendleton, said he would consider convening a hearing to investigate how the money is spent.

“We’ll need to find out whether what was intended is what is being done,” Jenson said. He and Anderson served on the House committee that put together the malpractice subsidy bill in 2003.

Gov. Ted Kulongoski proposed the program at a time when rising malpractice insurance costs were forcing some rural doctors to stop delivering babies. The program enacted by the Legislature covers 80 percent of malpractice costs for obstetrician-gynecologists, 60 percent for others who deliver babies, and 40 percent for all other doctors. In a one-page application, a doctor seeking support must state that he or she spends at least 60 percent of practice time in an area that the state has defined as rural.

Advocates for the subsidy program – including the Oregon Medical Association, which successfully lobbied to expand the program so that as many as 10 times more doctors could qualify – say doctors receiving the most support are obstetricians and others whose practices have been most threatened by sharp increases in malpractice premiums.

But as The Oregonian’s analysis shows, the state chose a definition of ” rural” so loose that doctors working everywhere but Oregon’s largest cities qualify. In addition to three plastic surgeons, the program has helped anesthesiologists in Ashland, dermatologists in Grants Pass, eye doctors in McMinnville and orthopedists in Newberg. Of more than 1,100 recipients, only 71 primary-care doctors and 54 OB-GYN doctors offered obstetric care. Ten OB-GYN doctors receiving support no longer attended births.

The program does not require a commitment to keep working in rural areas. At least 43 of the doctors who received support subsequently left the state or quit practicing, and 41 others have moved to urban practices, according to state medical licensing information.

During the program’s first two years, it paid more than $10 million toward the malpractice costs of participating doctors. By the end of 2007, it is projected to have spent $25 million. Lawmakers authorized up to $40 million for the four-year period.

To administer the legislation, audits by Saif Corp. check whether doctors applying for money hold a valid medical license, fit the state’s definition of rural and purchase the legally required level of malpractice insurance. The Legislature did not require Saif to consider the income of doctors applying for support or whether their specialty is in short supply in their location.

As a result, money that could have been invested in health care for towns with few doctors or none at all went to highly paid specialists in thriving suburbs and cities.

“It’s outrageous,” said Ellen Pinney, executive director of the Oregon Health Action Campaign, an advocacy group for the uninsured. “We need to make sure that public money we are investing buys us access to care for people who are most vulnerable.”

Ashland highlights the program’s failure to steer money to where it’s needed most. Access to doctors and hospitals is better in Ashland than in virtually all other rurally designated areas in the state. In addition to a local hospital, residents can seek care at two major medical centers 13 miles away in Medford. The local supply of primary-care doctors is more than four times the minimum needed by the population, according to the Office of Rural Health.

But by the end of 2005, 60 physicians in the Southern Oregon city had received a total of more than $700,000 through the malpractice subsidy program.

Young, one of five plastic surgeons in Ashland and Medford, is the only one of the five receiving the subsidy. He specializes in hand surgery, according to his Web site, in addition to offering cosmetic work. Young’s Web site sells a line of high-end cosmetics that includes $24-an-ounce moisturizers.

His 11-bedroom house, built in 2000, has a market value of $3.6 million, according to county records. Jackson County approved the construction as a single-family home. Last year, the county denied Young’s application to rezone the property as a church. He planned to convert the house into a spiritual retreat center for practitioners of Huichol shamanism, a healing tradition derived from the Huichol Indians of Mexico.

Young did not respond to four telephone calls from The Oregonian. After a fifth call, an employee responded: “His message is please don’t call him again.”

Ashland orthopedic surgeons Glen O’Sullivan, Hal Townsend, Douglas Morrison and John Maurer, who practice together, have received a total of more than $86,000 from the program, even though nine more orthopedists practice at two medical centers in nearby Medford. None of the four Ashland orthopedists responded to repeated requests for comment.

About 15 miles outside Portland, Newberg ophthalmologist Jonathan Jahnke received more than $6,000 from the program in 2004-05. Two other eye doctors practicing in nearby Tualatin, classified as urban, were ineligible for the subsidy. Jahnke did not return repeated phone calls to his office.

Defenders of the program said appearances can be misleading. The demands of small-town practice are such that newly recruited doctors often don’t last long. Many who have practiced a long time in those communities are nearing retirement.

“If one of those physicians leaves, the scale is tipped and the area becomes underserved,” said Scott Ekblad, director of the Office of Rural Health. “Retaining access is as important as recruiting doctors to underserved areas.”

Newberg illustrates the complexity of determining who deserves support. Residents are served by a new, $70.6 million hospital, Providence Newberg Medical Center. But orthopedic surgeon Julie Isaacson is one of only two orthopedists on staff and, therefore, available to respond around the clock to emergencies requiring orthopedic care at the hospital. Isaacson said the on-call burden is a barrier to recruiting surgeons to share the load.

“People don’t want to be in the situation of being on call all the time,” she said. She collected more than $21,000 in malpractice subsidies in 2003-04, and Thomas Joseph Croy, the other Newberg orthopedist, received more than $9,000. Croy did not respond to requests for an interview.

Isaacson said Newberg is as deserving as any rural community for the subsidy, even though residents have the option of traveling to nearby Tualatin, where nine other orthopedists provide care at a local hospital.

“It’s true we as a society spend too much on health care,” Isaacson said. “At the same time, people who have injuries need to be taken care of. People in small communities, they don’t want to have to go into Portland if they don’t have to.”

Some doctors are dumbfounded to learn that plastic surgeons, dermatologists and eye doctors in Ashland and bedroom comminutes around Bend, Portland and Salem receive aid as rural practitioners.

“That’s somewhat despicable,” said Timothy Gallagher, a family practitioner in Lakeview, 95 miles east of Klamath Falls. “I thought it was primarily for obstetrics.”

Gallagher is one of four doctors who care for pregnant women in Lakeview (pop. 2,400). Gallagher said women from the surrounding area travel 50 or 60 miles to have their babies at Lakeview’s 21-bed hospital. Gallagher received about $21,000 from the subsidy in 2004-05.

Robert Holland, a family-practitioner in John Day, said the allocation of money “probably needs to be looked at.” Holland is one of four doctors who deliver babies at the 25-bed hospital in John Day. The closest urban medical center is 160 miles away in Bend.

Holland quit delivering babies about four years ago, after his malpractice insurer raised the yearly premiums from $18,000 to more than $30,000. Holland eventually found an insurer with lower prices and resumed caring for pregnant women. He received more than $22,000 from the subsidy in 2004-05.

“That’s made a big difference,” Holland said. “Without that money, I’d probably get out of doing obstetrics.”

The prospect of pregnant women in small towns losing access to obstetric care sparked Kulongoski to propose the subsidy in 2003. News reports had dramatized the plight of rural communities, such as John Day, where doctors were dropping obstetrics to avoid soaring malpractice costs.

As originally proposed by the governor’s office, the program would have supported about 150 doctors. It included an income test “to be sure the program benefits those who need it the most,” Cory Streisinger, director of the state Department of Consumer and Business Services, told the House Judiciary Committee at a hearing in May 2003.

Then, the Oregon Medical Association proposed a way the program could be “enhanced and expanded,” in the words of association lobbyist Scott Gallant, who also testified at the May 2003 hearing. Lawmakers took the association’s advice to expand eligibility to more than 1,000 doctors and authorized the use of $10 million a year from workers’ compensation assessments paid by employers. They dropped the income test.

Streisinger said the income test “would have been very difficult to administer” and failed to garner support in the legislative work group, which included representatives from the Oregon Medical Association, malpractice insurers, the hospital industry, trial lawyers and the Office of Rural Health.

“Legislation is the product of compromise,” Streisinger said. “Could it use some fine-tuning? That’s a legitimate question.”

Gallant, now associate executive director of the Oregon Medical Association, said, “Any analysis that shows there are areas that need to be refined, we’ll look at very seriously and positively.”

But he said the rural program is working largely as lawmakers intended. “It’s true that one of the primary concerns was striving to mitigate the precipitous increase in liability premiums for general practitioners, family medicine doctors, and those doing obstetrics,” Gallant said. “It’s also true we recognized there is a need for general surgeons, OB-GYNs, and neurosurgeons in areas that have a real difficulty in retaining and recruiting those physicians.”

Representatives Jenson and Anderson said the legislation’s goal was to maintain access to doctors in remote, rural towns, particularly those with too few obstetricians.

“I don’t think Ashland is rural,” Anderson said. “I don’t think plastic surgeons are threatened with not being able to make it in this state.”